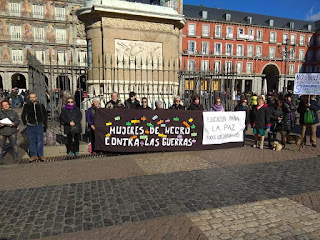 From the standpoint of our feminist, anti-militarist and nonviolent ideology, Women in Black against war believe that war is not innate to the human being, rather it is a cultural response developed and fed by sundry powers. Being a learned response, we can also unlearn it.

It is not enough to be against violence and war, one must analyze the causes that produce them in order to be able to avoid them. The tendency of our governments to maintain the privileges of the most favored with walls and fences; illegal returns of those without papers; refusal of asylum, violating signed international laws; denial of the universal right to health services; stigmatization of emigrants because of the notion that they take away jobs or consume our resources and the reversal in the rights of women are the way to promote values that respond to a social model of violence fomenting fear and disdain for people who are different.

Women in Black against War want to build peace, struggling for another society and considering new models. We are on the side of values that lead to a social change equipping ourselves with critical attitudes and being involved in our social reality.

WE RECOGNIZE the work of the teachers who continue to consider these approaches important and who carry them out, often in a minority and alone.

* Militarism in our societies that teach the idea of armed defense in which war and violence are the only solutions.

* The models that we are experiencing and those that we are teaching to the infants and youth.

* The disastrous example politicians are offering to the youngest generation, polarizing, lying, occupying themselves with the interest of their respective political parties and not those of the collective.

* The influence all that has in our society and personal relations.

* The cutting of budgets for public education and increasing support for private education.

WE DEMAND of our legislators:

♀ That they always employ dialog and negotiation as democratizing tools and that human rights be above any party interest.

♀ That they practice listening in communication and do not polarize society more.

♀ That they not lie to us and that they treat us as adults.


"We are aware that the army costs us an arm and a leg and that in a critical situation they would not deliver us from any predicament…, all of us being persuaded that any war would end in a major disaster".
Translated from Emilia Pardo Bazán, Epilogue to “Pro patria”

With Google+ plugin by Geoff Janes